Why I love Jesus and am religious

I am an excitable person.  Sometimes that is a really cool and fun thing, and sometimes it gets me into a bit of trouble.  The video I posted yesterday, "Why I hate religion, but love Jesus," excited me instantly.  The videography, the rhymes, the passion -- it got me.  I thought it was wonderful and wanted to share it.  I heard some truths that I think resonate with a lot of people.  Parts of it left me a bit "weirded out," but in my  excitement, I found ways to work out those "kinks" in my own mind to fit into my own ideas about theology.  So after watching it just once, I posted it on my blog.  And that is where I confess a lack of wisdom on my part.  Just because I can work out the "kinks," doesn't mean that it makes them less dangerous to observer/partake in and/or to share with others.  I want to be careful and wise about sharing truth and protecting my mouth (and my blog) from spreading what I believe to be untruths.  I hope that if you came to my blog (or any of my feeds) and watched that video that you will take a moment to read this follow up.  I am hesitant to write this response, because it is very loaded and I am by no means a trained theologian.  However, I opened up the conversation and I feel have a responsibility to address it to some extent.  (Because there are others that say it better, I am going to include some quotes from other critiques I have read...)
I was not offended when he, Jeff Bethke, said he hated religion. I rationalized this by assuming he meant he hated false religion.  I'm going to quote a lot from Kevin DeYoung because I feel he has a complete, well thought, critique of the video. I am going to pull the parts that most speak to the parts of the video that left me feeling unsettled (however, I hope you will also take the time to read it in its entirety).

"More important is Bethke’s opening line: “Jesus came to abolish religion.” That’s the whole point of the poem. The argument—and most poems are arguing for something—rests on the sharp distinction between religion on one side and Jesus on the other. Whether this argument is fair depends on your definition of religion. Bethke sees religion as a man made attempt to earn God’s favor. Religion equals self-righteousness, moral preening, and hypocrisy. Religion is all law and no gospel. If that’s religion, then Jesus is certainly against it.

But that’s not what religion is. We can say that’s what is has become for some people or what we understand it to be. But words still matter and we shouldn’t just define them however we want. “Jesus hates religion” communicates something that “Jesus hates self-righteousness” doesn’t. To say that Jesus hates pride and hypocrisy is old news. To say he hates religion—now, that has a kick to it. People hear “religion” and think of rules, rituals, dogma, pastors, priests, institutions. People love Oprah and the Shack and “spiritual, not religious” bumper stickers because the mood of our country is one that wants God without the strictures that come with traditional Christianity. We love the Jesus that hates religion...

Unless we define the word to suit our purposes, there is simply no biblical grounds for saying Jesus hated religion. What might be gained by using such language will, without a careful explanation and caveats, be outweighed by what is lost when we give the impression that religion is the alloy that corrupts a relationship with Jesus."

This is exactly what "weirds" me out about the video as I see in it hidden dangers that on the surface incur passion and praise, but in its depths causes corruption.  It is no lie that many many people have been hurt and wounded by the church, historically and now -- physically and emotionally.  I have seen it within my own family and on a daily basis in my own community.  The pains are real - the wounds deep.  I don't want to gloss over this truth.  On the same note, I do not want to ignite "anger" and "resentment".  I would hope, rather, that Bethke or any other who has gone through similar journeys would have hopes to reconcile the chasms that separate those who love Jesus from the church that Jesus loves.

Religion might preach grace, but another thing they practice
Tend to ridicule God’s people, they did it to John The Baptist
They can’t fix their problems, and so they just mask it
Not realizing religions like spraying perfume on a casket
See the problem with religion, is it never gets to the core
It’s just behavior modification, like a long list of chores
Like lets dress up the outside make look nice and neat
But it’s funny that’s what they use to do to mummies
While the corpse rots underneath

I’ve already said that I don’t think “religion” is the right term for what Bethke is talking about. But he has done a great job here of describing false religion. Jesus blasted the Pharisees for being “whitewashed tombs,” for looking beautiful on the outside and full of dead people’s bones on the inside, for appearing righteous but being full of hypocrisy and lawlessness (Matt. 23:27-28). It is possible for churches and churchgoers to have the reputation for being alive, but actually be dead (Rev. 3:1). Some churches claim to love grace, but all they give you is legalism. Bethke is hitting on a real problem.

Religion is not a bad thing.  Religion without Jesus is.  For a better idea of practical differences that separate the false religion I feel Bethke is referring to from Biblical (gospel) Christianity, please check out this table from Tim Keller's Gospel in Life curriculum. 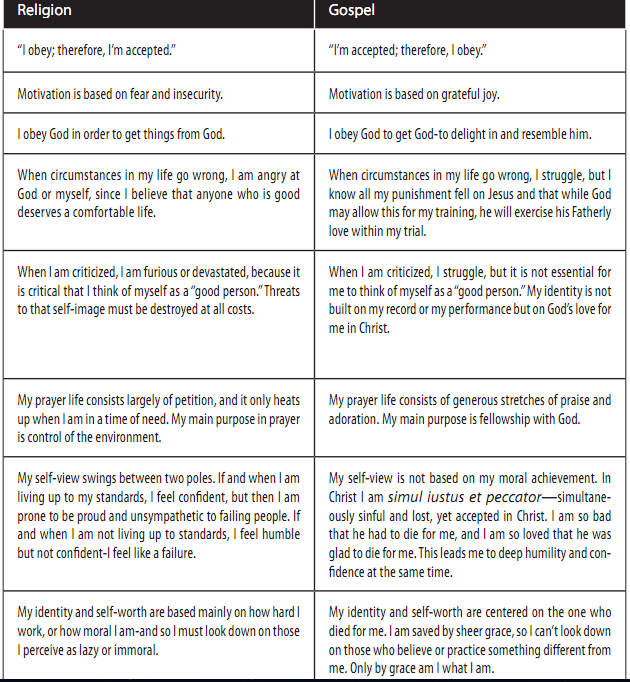 Am I guilty of believing and living like the religion column? As a sinner, most definitely.  Yet, I believe in the gospel and strive for and long for a life centered on Christ alone.

Now back to the point, one thing is vital to mention
How Jesus and religion are on opposite spectrums
See one’s the work of God, but one’s a man made invention
See one is the cure, but the other’s the infection
See because religion says do, Jesus says done
Religion says slave, Jesus says son
Religion puts you in bondage, while Jesus sets you free
Religion makes you blind, but Jesus makes you see
And that’s why religion and Jesus are two different clans

I won’t repeat my initial comments about religion and Jesus and whether they are really “on opposite spectrums.” I don’t think they are. That point notwithstanding, Bethke speaks the truth in this section. The differences between slavery and sonship, bondage and freedom, blindness and sight are all biblical themes.

I think the line about “religion says do, Jesus says done” can be misleading. Too many people hear that as “relationship not rules” when we’ve already seen that Jesus wants us to do everything he has commanded (Matt. 28:20). But if “do” means “do this to earn my favor” then the contrast is very appropriate.

We don't do good things to be saved.  As believers we do good things out of the outflowing of God the Father working through us.  We are not saved by works, but by grace through faith.  Faith without works, however, is dead. Read James 2:14-26.
I really like DeYoung's conclusion.  This being part of it:

"The strengths in this poem are the strengths I see in many young Christians—a passionate faith, a focus on Jesus, a love for grace, and a hatred for anything phony or self-righteous. The weaknesses here can be the weaknesses of my generation (and younger)—not enough talk of repentance and sanctification, a tendency to underestimate the importance of obedience in the Christian life, a one-dimensional view of grace, little awareness that our heavenly Father might ever discipline his children or be grieved by their continued transgression, and a penchant for sloganeering instead of careful nuance...
Thanks for reminding us about Jesus. But try to be more careful when talking about religion. After all, there is one religion whose aim is to worship, serve, know, proclaim, believe, obey, and organize around this Jesus. And without all those verbs, there’s not much Jesus left."

I believe in worship, service, prayer, proclaiming the gospel through word and deed, my aim is to act in humble obedience to my Savior, and I thirst regularly for fellowship with believers through common worship -- this makes me religious.
I struggle greatly with wrapping up this personal response.  There is so much to be said and so many directions to go and I fear that in omitting any of it, I am only causing more confusion and spreading a dangerous fire.  Yet, I stop at this.  I pray that God will use these words for his glory or else erase them from your mind.  Thank you for being a part of the conversation.
---
p/s I found this dialogue between DeYoung and Bethke very encouraging. i hope you'll check it out.