Below is an email I got from my sissy on Tuesday.  She left for Ecuador this past Friday with other students from the medical field and UK doctors doing medical missions for 10 days.  What she describes below is something I've never dreamed of experiencing outside of watching Grey's Anatamy (and I'm sure she ever imagine it either!)  I'll let you read for yourself....

hola mi familia!!  i´m at an internet cafe in santo domingo.  you will not believe what happened to us yesturday!!!! on ou rway from quito to santo domingo you have to go through a winding mountain, very dangerous!! we stopped at los banos before the hard drive....then quickly got stopped in heavy traffic...a tour bus went over!!!! we saw people on the hill but our bus driver wouldn't let us out.  2 docs from the other bus ran down there though....then they called for backup.  we went running!  i didn´t know what to expect but a huge holy crap came to mind and i immediatly thanked god for my life.  i started down the steep hill, losing my footing very luickly, the bus was in the creek upsided down, people screaming and more gore then i´ve ever seen.  i had no idea what to do, so people and some other students helped the ambulatory people up the hill, and i mean STEEP. it was awful, finally paremedics came with back boards but before that we were bracing peoples necks with shoes and ripped tshirts.  also it spelled like gas, but for some reason i wasn´t scared at the time.  there were a few fatalies from people under the bus, but the majority got out.  as i made my final descent to the top, it finally hit me and i fighted the tears, holding onto the rope someone let down to help. plus, all the older females on the trip were up there with hugs...and all the people out of there cars were thanking us.  unbelievable.  also there was a turned over gas truck.  finally we got to get going after about 4 hours, but right were the bus went off there was a sign that said "reducio velocidad ahora!!¨  it was scary driving by........what an experience!!! i´m ok now but wow what a shocker... i was exhausted and my quads hurt today.

For a fuller story click HERE.  Its very intersting and cool to hear what some of the doctors were seeing/feeling/doing.  Below are some pictures that I have found from various news websites.
I'm so thankful for Jessica to have gotten to be a part of this.  God is a faithful God and I can't help but to see His hand in this as this for sure will be a pivitol moment in my sisters career and life.  I think it is so neat how God works to affirm His callings for us.  It was by no mistake that 40 people in the medical field happend to be behind this bus when it wrecked.  We have a God at work who is might to save! 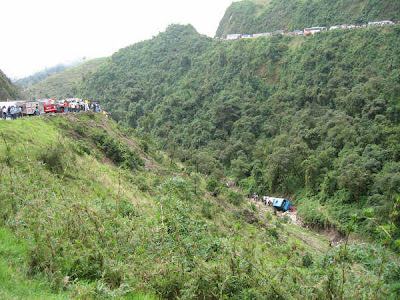 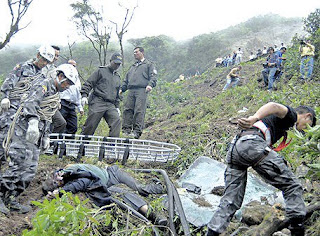 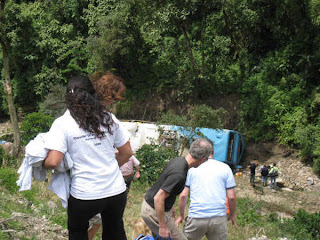 Jessica making her way down the steep hill carrying tshirts to be used as neck braces! I can recognize my sissy's curly locks anywhere! 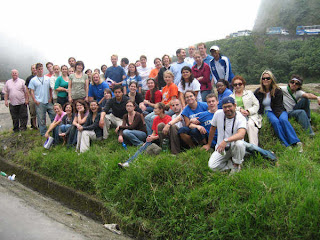 The UK crew: Jessica is in a blue shirt towards the bottom right.