I am voting against English only in Nashville. Voy a votar en contra de Inglés sólo en Nashville. 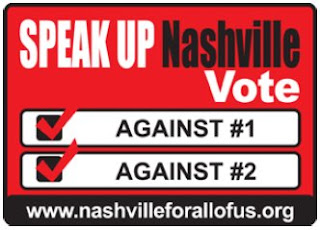 Tomorrow Nashville (ashamedly) becomes the first major US city to try to pass an English only amendment. Read below-

“English is the official language of the Metropolitan Government of Nashville and Davidson County, Tennessee. Official actions which bind or commit the government shall be taken only in the English language, and all official government communications and publications shall be in English. No person shall have a right to government services in any other language. All meetings of the Metro Council, Boards, and Commissions of the Metropolitan Government shall be conducted in English. The Metro Council may make specific exceptions to protect public health and safety. Nothing in this measure shall be interpreted to conflict with federal or state law.”

If I was good with words I would write an eloquent and well punctuated journal about my thoughts about why I’m voting against “English Only”... Instead, I will bullet point some of my thinkings and give some backup from links to people who are better at arguing the subject.

First off. Lets remember where I work. Last year Siloam served people from 93 countries outside of the US … representing 64 different languages.

Another- how does “English Only” fits within Title 6- “No person in the United States shall, on the grounds of race, color, or national origin be excluded from participation in, be denied the benefits of, or be otherwise subjected to discrimination under, any program to which this part applies.”

The very depths of my gut tell me that this is not Biblical. I know there is a separation between church and state so perhaps this should not apply—but it is my conviction to help my neighbor that leads me to vote against this referendum.

Definition of a refugee: someone who is displaced from their country because of a well found fear. – Nashville is what I would consider a welcoming home to refugees – offering asylum and support. If we pass “English- only” and continue to invite (and pridefully boast on our extended hand to those in need), Nashville, at best, will simply be a liar. The new sloagan for Nashville – The City of False Advertisement and Giver of False Hope. Nice.

Do I think everyone should learn English. Yes. Should the government take steps to expedite and ease the process for immigrants? Probably so. This amendment is FAR from how this should be accomplished. “Immigrants know better than anyone the importance of learning English. They also know that the faster they learn English, the faster they can assimilate into the society. If the concern is that immigrants are not learning English quickly enough, we should create more opportunities for them to learn.”-Nashville for All of Us

I have many more thoughts on this- I've not even scratched the surface, but I have already gotten myself worked up in just writing this and in reading from other sources both for and against. Whether you are from Nashville of not, I think it is worthy of your time to know this issues of this vote. Hopefully, this will not pass by a large majority and set an example to all other US cities, but if its happening here, its more than likely already underway all over the country.


For:
Nashville English First
Latino Supporters for English Only (The Tennessean)
I would post more links, but it seems as though most of Nashville is against it-- so why is there a vote you ask? Good question.