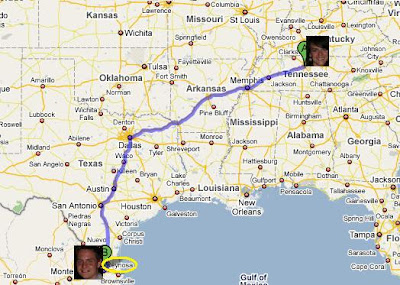 In about 20 minutes it will be a week since I last saw David... as I was headed to Townsend for Helen's Bachelorette party- David was getting ready to head over to Reynosa, Mexico. They were supposed to arrive Saturday evening around 7. Instead, they did't get there until early afternoon on Sunday. Their first flight to Dallas was delayed- causing them to miss their connecting flight to some little airport in the tip of Texas. They had to wait 5 hours for the next flight after finally arriving in Dallas. They finally board a plane (after that one was delayed a bit as well). They are on the plane for a good bit of time and before even taking off they are all escorted off the plane. Apparently not everything checked out right. They go to another terminal and wait some more.. and then finally.. they get off the ground!- finally on their way- oh but wait.. one of the two engines BREAKS. They are in THE AIR and the ENGINE BREAKS. Long story short priase God they had only just taken off and after a couple minutes make an emergency landing back at the airport (which david says was the fastest/bumpiest he has ever experienced a plane landing) and the plane is met by speeding emergency vehichles. He calls to tell me all of this at 12:30 in the morning! phew- thank you Lord my Husband is still allive. After being put up in a swanking hotel for the night david and the gang finally made it and were able to cross the border into Reynosa, Mexico! I've gotten to talk to David every night for a minute or two- they are having a great time. They are working with Isaiah 55 Ministries for the Deaf. I can't wait to hear more about it and hopefully share some pictures! David gets home tomorrow night at 10PM... that is to say if he doesn't have another trecherous night in the Dallas airport!!... pray for good travels will ya!