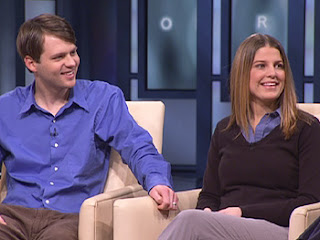 Today at work we had an Eye Clinic and had a volunteer Doctor come in to give the exams. Dr. Daniel Burt was our Doctor. He was really nice and took time to share with us different things he is doing.. going to Hati in the next couple weeks for the 6th time.. oh .. and he is going to be on Oprah today. The episode is on different people "living on the edge." Dr. Burt and his wife...they are more or less "dumpster divers" or "freegans." From the site: 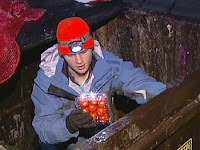 While most newlyweds spend their time picking out new furniture and china, Daniel and Amanda are picking through eggshells to find salvageable food. This doctor and engineer are Nashville-area freegans. When Lisa visits their home, Daniel and Amanda show off some of the items they have stored up. Their haul includes fruit and vegetables, frozen pizza, milk and eggs, 50 boxes of cereal, 2,000 envelopes, sheets, rugs, lotion, furniture…even workout equipment! They say they especially love cooking using cans that have lost their labels. "They're the most fun," Daniel says. "We call them 'mystery cans.'" Daniel says he and Amanda adopted their freegan lifestyle out of frustration with our wasteful culture. "I think we're 5 percent of the population and we consume 30 percent of the world's resources. We just think that's wrong that so many people suffer," Daniel says. Amanda says she is not worried about what other people think of them. "We'd much rather be known as people that dig in trash than people that buy needless things," she says. "You have to learn to not get your happiness from things. It's a pretty easy thing to learn once you try it."
Daniel and Amanda started their freegan lifestyle about two years after they started dating. "At first, I was really grossed out," Amanda says. Daniel says he introduced the idea to Amanda because he had some friends who did it first. When he showed Amanda the quality of what they could get in the trash, she agreed to give it a try.
What made them think it was a good idea in the first place? Daniel says freegan ideas about consumption fit into their beliefs. "We try to live very simply, and we don't spend a lot on ourselves. We are very happy with having a little," he says. "We like to make it a priority to share a lot of our money. A lot of that comes from our Christian values of sharing and generosity."
They say their scavenging can be so productive that they sometimes can't even use everything they find! When that happens, Amanda says, they either give their surplus to others or donate it to shelters or charities. "Just put it back into the system rather than into a landfill," she says.

If you want more of a preview click HERE.