My girlfriend Katie is a warrior! She is currently serving God in Kenya (although she leaves tomorrow to spend time in Sudan for several weeks ). So much is going on still in Kenya & I wanted to share some of her most recent email update:

No one is left untouched:
Gladys, the Street Mama--
I have known Gladys for quite some time because she is a beggar on a road that I frequently walk. I was worried about her during the election turmoil because she is a Kikuyu (one of the most targeted tribes) and lives in Kibera (a large slum with much of the violence). Finally I found her in her usual spot with her 5 year old son, Owen. She told me that she and her three boys had to flee their home in Kibera, running away from the violence; as a result little Owen lost his shoes. She told me that while they were fleeing they were separated from Gladys’ mother and she had not been able to find her since. Recently I went by to check on Gladys, and she told me that she had gone back to Kibera to find her mother. Her neighbors told Gladys that her mother was at the morgue, killed by the rioters.
Sara, the wealthy Kenyan--
Just the other day I met an attractive Kenyan woman who was out searching for a new place to live. She told me that she is married to an American man; they have three children and live in a wealthy part of Nairobi. During all of the violence, they had to fight off criminals from their home, even having many of their things stolen. I asked her why she thought this had happened and she thinks it is because she’s married to a white man, so many assume they are wealthy. The election violence has served as an excuse for criminals to run wild, stealing, looting, and raping. The rape rates which were already quite high have nearly doubled during the violence. Please continue praying for Kenya and the many, many people that have had their lives drastically changed as a result of the violence. Also pray for the leaders to humble themselves and come to a peaceful resolution. 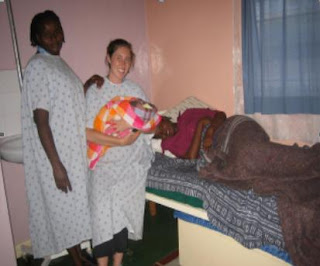 *Katie after helping deliver a baby (which she does a lot of!)*