I was pulling for the Giants. Hard! I didn’t grow up in the big apple. I’m not a Manning groupie, Eli or otherwise. Heck, 85% of the season I could care less about pro football. But I still wanted those Giants to win! Why? Because regardless of my lack of profootball focused attention, I’ve paid attention enough to hate the Patriots and please tell me that I am not the only woman in the world who is extremely turned off by Brady’s quiet cockiness. Needless to say, there I sat in front of the tube, my blood pressure rising, my annoyance level elevating quickly by the patriot fans in the room, and my yearly consumption of peanut m&ms reaching a maximum early in this second month as I sat not still and not quietly watching the game.

So the giants won. But the greater victory was the promise that I will not have to see Tom Brady, “America’s favorite, good ol’ boy, gq batchelor, best thing since sliced bread, man of the year, ect.” plastered shamelessly across every media outlet known to the modern world. Futhermore, I’ll be thankful to live the rest of my life without hearing that the Patriots are the “best team in history, 19 and 0 baby!” because frankly, I just don’t care about pro football that much.

For this, however, I have to say, “Well done Eli, well done,:”
Eli the MANning!

On a completely different note. I took myself to a presidential campaign this past Saturday. Cute ol’ John McCain. Honestly, I would like to see any presidential canidate so gracious to come to my neck of the words, but besides Hilary he was the only one. The highlights of the rally were the group of “58 is great” buddies from McCain’s Navy graduating class, especially this man (who I think I have an old man crush on)--->>

McCain was for sure enthusiastic. He loves his fellow veterans, he is passionate about “not surrendering” in Iraq, and loves (as every current republican canidate claims) the saint, Ronald Reagan. For the most part, I was pretty impressed and was glad I spent the time to, as I heard a highschool student exclaim to a friend as I was leaving the building, “practice my democratic duty.”
Oh, and did I mention I met John? Apparently telling a security guard that you’ve been in a man’s prison cell (which lest you forget, I did when I was in Nam) is akin to being his bff. So, here we are, and no dad, I’m not taller than him. 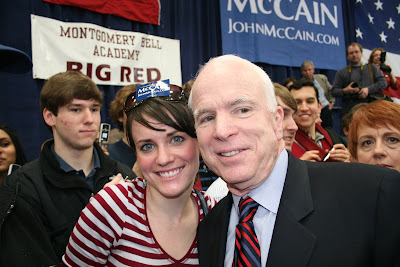